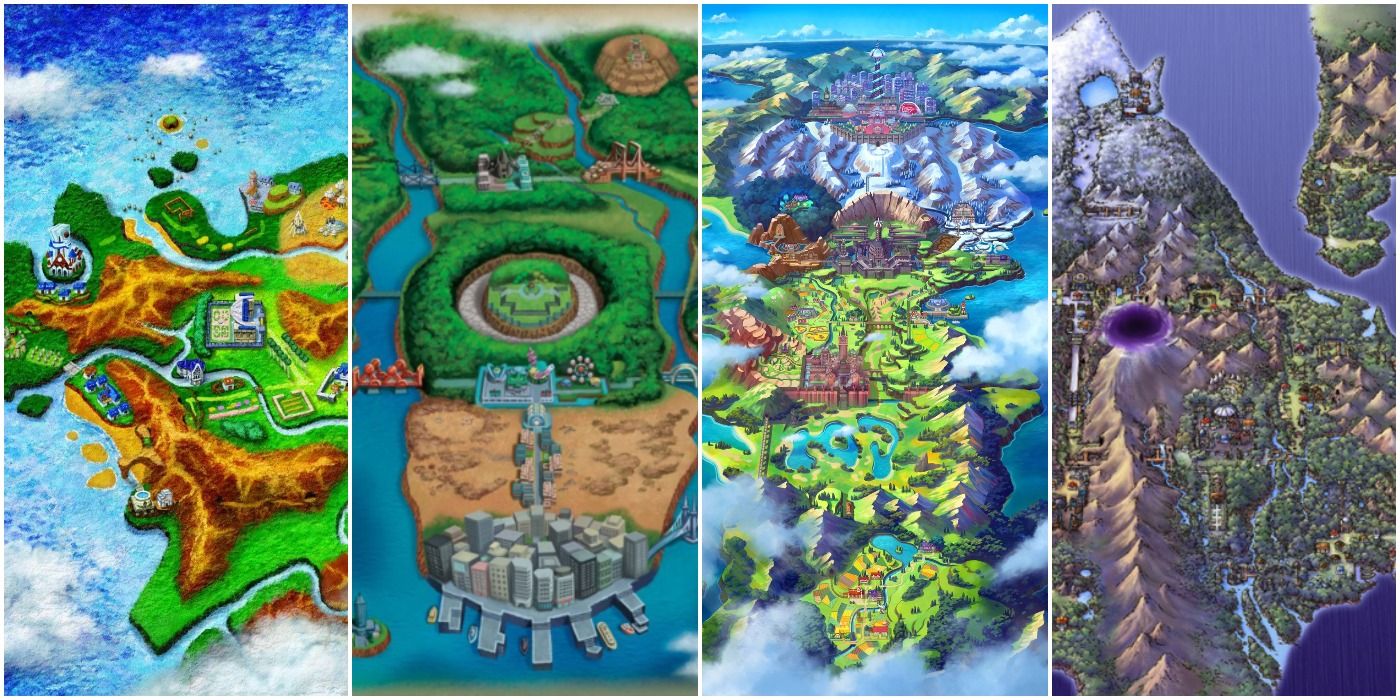 For each generation of PokÃ©mon, the geography, biodiversity, and beauty of its vast regions are just as vital to world building as brand new PokÃ©mon or unique battle mechanics. While the first four generations were based on Japanese regions, Gen V Unova transported the sprawling metropolis and skyscrapers of New York City and the surrounding metropolitan area to the PokÃ©mon world. The following generations drew their inspiration and influence from the north of France (Kalos), the Hawaiian archipelago (Alola) and an upside down United Kingdom (Galar).

All of this begs the question, where does Pokemon go from here, literally? Even with previous generations of globetrotters, there remain a countless amount of culturally significant, beautifully breathtaking, and utterly fascinating real-world locations that Nintendo and Game Freak have yet to turn into new PokÃ©mon regions. Additionally, these actual regions can inspire and inform design choices for new PokÃ©mon and regional forms. Below is a taste of the future of this 25-year-old RPG series.

When ranking countries based on the total number of bird species, South American countries occupy 6 of the top 7 places, with the 1,878 species in Colombia taking the top spot. Seeing how the regional Pokemon birds rank among the cutest in the series, it would certainly make sense to base a new Pokemon game on such an abundant and bird-friendly ecosystem. Wouldn’t it be great to explore and catch PokÃ©mon in their own Amazon rainforest?

Fans curious about South America in a Pokemon game should check out the popular fan-made Pokemon Sage, located in the Urobos region. Most of the game’s Fakemon designs are inspired by the animals, topography, lore, and mythology of South and Central America.

Australia is home to some of the most unique (and downright spooky) animals on the planet, providing a deep and expansive foundation for new Pokemon design ideas. An Australian region could also meet fans’ desperate need for a full evolutionary line of Kangaskhan, including a male form, and an official name for her baby.

When it comes to landmarks, the Sydney Opera House could be a big launching point for a new take on Black & White’s Pokemon musicals. Here, they could be retooled as PokÃ©mon Operas, incorporated as a primary form of competition in contrast to – or alongside – traditional PokÃ©mon Battles.

Italy’s immense cultural, economic and historical wealth could very well play the role of a PokÃ©mon region. Another Milan would be a prime location for the return of PokÃ©mon contests and Gen 3, 4 and 6 super contests.

RELATED: 5 Great NES Games Released In Europe Only (& The 5 Worst)

As a nod to Italy’s century-old winemaking culture, players could visit (or set up their own) vineyards to mash berries and brew signature berry juices. These juices can add temporary or permanent stat boosts to players’ PokÃ©mon, with rare combinations unlocking new moves or hidden abilities.

A return to Asia would be a wonderful next step for the franchise, and Indonesia would provide one of the most unique and comprehensive gaming experiences, as the country is made up of over 17,000 islands.

As a fun way to change up the series, Game Freak could incorporate roguelike elements and introduce random island tours. Jumping across thousands of islands of different sizes and expanses, where there aren’t two, would make fighting and catching PokÃ©mon a fantastic twist.

In addition to the diversity of terrain, topography, culture and climate of its continent, Portuguese territory extends to the sea with its two autonomous archipelagos, Madeira and the Azores. A post-match DLC hike to these islands could present some interesting new challenges and their own unique Pokedex.

The world famous Lagoa do Fogo of the Azores, a lagoon formed by volcanic craters, seems to be the perfect home for Volcanion. The islands of Madeira, closer to Africa than to Europe, are much warmer with surprisingly large mountain ranges, creating distinct microclimates and homes for thousands of flora and fauna.

The island nation of Madagascar is one of the most biodiverse regions on the planet. Over 90% of Madagascar’s plants and animals are endemic and found nowhere else in the world due to 88 million years of isolation after breaking away from the Indian mainland.

RELATED: PokÃ©mon Let’s Go: The Seafoam Islands (& 9 Other Places That Are Exactly As You Remember)

This fascinating fact could open up huge inspirations and opportunities for a region made up almost entirely of new PokÃ©mon, much like Ruby & Sapphire. Is it too much to ask Game Freak for a lemur PokÃ©mon?

We’ve seen the Super Mario and Assassin’s Creed series venture into their own Odyssey, so why not Pokemon? Greece’s epic history, ancient mythology, and uncompromising beauty would be an awe-inspiring and legendary backdrop for a new generation of PokÃ©mon.

Could we meet a new trio of Legendary / Mythical PokÃ©mon based on the gods and monsters of ancient Greece? Or, more aptly, regional forms for the forces of nature – Landorus, Thundurus and Tornadus – as their names refer to Aeolus, the Greek “guardian of the winds”.

What could be a more exciting entry to this series than uncovering secrets, solving mysteries, and searching for treasure in ancient sandy tombs in an Egyptian-inspired region with a team of PokÃ©mon in trailer?

Yamask and Cofagrigus would certainly be abundant in these tombs alongside other Ghost, Dark, and Ground types, possibly even a line of Pokemon mummies. And of course, we’d love a Sphinx-based PokÃ©mon, either a standalone Legendary or a regional evolution of an Earth / Psychic Shinx.

With an area of â€‹â€‹3.8 million square miles, including the largest proportion of freshwater lakes on Earth, Canada is one of the most geographically and biologically diverse countries on the planet. A PokÃ©mon equivalent from Canada would be near Unova and presumably share a colonial history with Galar, providing the ability to travel and correspond between the three regions.

Would Bidoof and Bibarel automatically be the National PokÃ©mon of a Canadian region? Or could Game Freak introduce a moose-like Pokemon so it can have a say?

A far-fetched suggestion, of course, but not as far-fetched as it seems. There are a decent number of PokÃ©mon that are confirmed or believed to be from outer space, including Clefairy, Elgyem, Lunatone, and the Mythical Deoxys. A tale involving space travel would be a compelling way to uncover the origins of PokÃ©mon life.

An intergalactic, planetary adventure – in search of starry-eyed PokÃ©mon across the cosmos, beyond the limits of space and time – would profoundly overturn expectations and forever expand the possibilities of the PokÃ©mon universe.

Nothing more badass than watching Buzz Lightyear ping around the sun while the Doom theme plays.

Thomas is a culinary school graduate who enjoys games of all kinds (video, board, cards, mind) and decided to use his college writing experience to create organic lists for TheGamer. He’s a die-hard fan of all things Nintendo, even though his love of the game started at the age of 7 with Sega Genesis and Sonic the Hedgehog (shhh, don’t tell Mario). Tom plays on Switch, PS4, PC, 3DS, Wii, GameCube, N64 and SNES Mini (say â€œfuzzy pickles!â€). Since spring 2020, he has also acquired an exciting new hobby in bird watching – aka the PokÃ©mon of adulthood! Be nice, be well and stay safe!