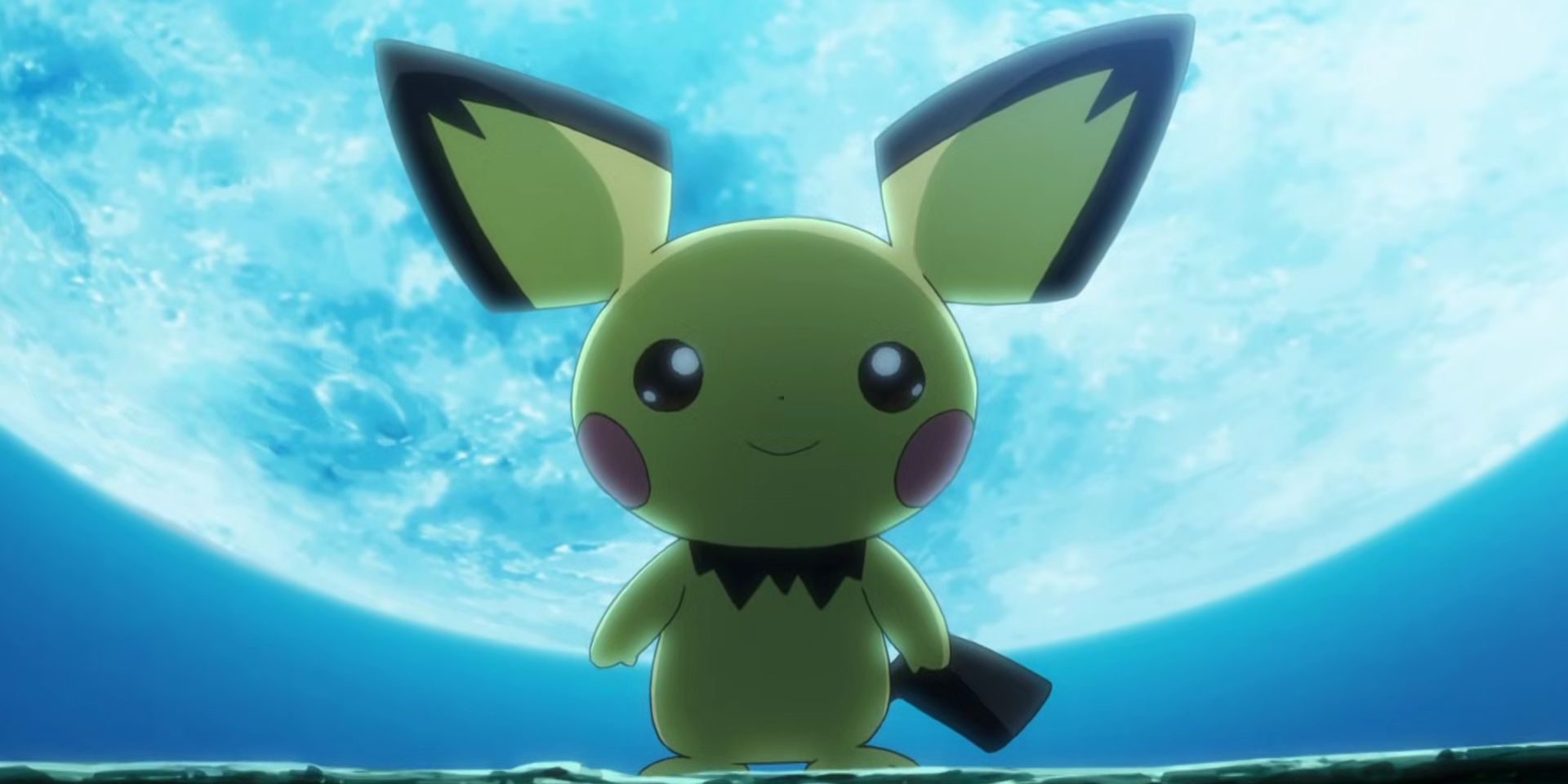 Through thick and thin, Ash and Pikachu made their way to the top, becoming best friends along the way. But, they weren’t always best friends, in fact, it was quite a while before these two characters met. In PokÃ©mon Journeys: The Series’ first episode, it explores the life of Ash and Pikachu before and until their first meeting.

This episode has two main storylines, one following future trainers Goh, Chloe, and Ash, and the other following Ash’s Pikachu as Pichu.

In the episode, Pichu lives in a forest, surrounded by other wild PokÃ©mon, but it’s still quite lonely. The PokÃ©mon does not yet control its electricity very well and does not belong to any type of group either. Pichu watches other PokÃ©mon have close relationships with each other and becomes sad, until one day he falls off a cliff into a Kangaskhan’s paws.

Kangaskhan, literally the Parent PokÃ©mon, immediately takes Pichu as his adopted son. Here, Pichu becomes like little Kangaskhan’s brother living in his mother’s pocket. They play together, take a nap and share berries. Looks like Pichu has finally found his own family.

Being a baby Pokemon, living alone in the wild would have been difficult for Pichu, so it’s nice to see Pichu finally find a safe place to call home. The episode is filled with many moments of brotherly and motherly love between Pichu and the Kangaskhan, with the mother even patting him to sleep in her pocket when agitated. There is clearly a strong bond between them, so it’s no wonder the Kangaskhan treats Pichu as one of their own.

Over time, Pichu and little Kangaskhan grow up. Both of these PokÃ©mon stay in Mother Kangaskhan’s pouch during the journey, but as they get bigger, their size puts more stress on her body. Like a stubborn mother, the Kangaskhan insists that Pichu travel inside her pocket despite the additional pain it causes her.

Once installed in a cave, Pichu decides, with tears in his eyes, that it is time to leave his family in Kangaskhan. As he moves away from the Kangaskhan at night, Pichu evolves into Pikachu.

It is important to note that Pichu evolves into Pikachu once he feels a lot of happiness after being treated well. Maybe Pichu would never have evolved into Pikachu if he had never met this Kangaskhan family. Before meeting Kangaskhan, Pichu lived alone, with no friends to speak of. Once he received a warm and loving family, Pichu was finally ready to grow and live more independently.

Meanwhile, while it’s unclear how old he is at the start of this episode, Ash is still the same excitable, Pokemon-loving kid he always was. He begs his mother to let him go to a PokÃ©mon camp with Professor Oak, but unfortunately sleeps thanks to his alarm.

So, the PokÃ©mon camp continues without Ash and instead we follow Goh and Chloe. Here, the show establishes Goh’s as a smug, know-it-all PokÃ©mon fanatic, while also showcasing his goal of catching a never-before-seen PokÃ©mon. While it doesn’t resonate as emotionally as Pichu’s story, this part establishes Ash’s future sidekick and his fascination with the PokÃ©mon Mew, which he spots during camp.

RELATED: Pokemon Theory: Mr. Mime Is NOT Ash’s Father – But He is [SPOILER]-ing his mom

Following the PokÃ©mon camp and the evolution of Pichu, the episode moves many years later to the events seen at the start of the original series. The episode pays homage to Ash’s run to Professor Oak’s lab and the moment Oak gives Pikachu to Ash. But this time, it shows their first meeting via Pikachu’s point of view, as Pikachu meets Ash’s excitement over her beauty with a powerful zap.

With the backdrop of Pikachu’s backstory, his demeanor seems a bit offbeat. As Pichu, the PokÃ©mon trusted others, never showing the same level of daring it gives Ash at the start of their adventure together. It could be that once Pichu evolved, he became much more independent, actively choosing not to rely on other PokÃ©mon or people. So, as a Pikachu, it takes a lot longer for the PokÃ©mon to trust and love those around it.

Independently, PokÃ©mon Trips’ The previous episode provides a wonderful story in Pikachu’s life as Pichu, highlighting why and how Pichu evolved into the Pikachu we know and love today.

What’s the best anime opening ever?