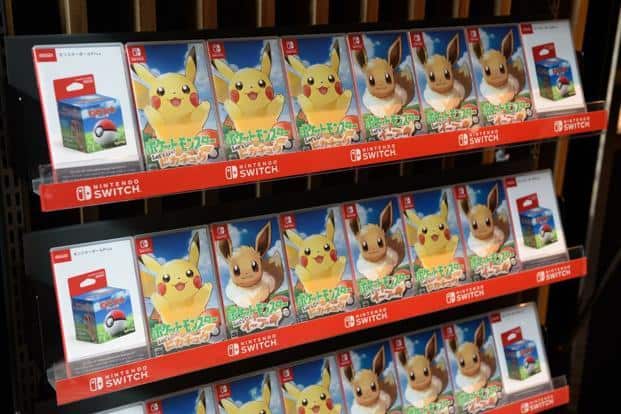 Tokyo: Nintendo Co. is betting it can sell millions of Switch consoles this holiday season by introducing a new Pokemon game that interacts with free-to-play mobile hit Pokemon Go, as well as a new character that looks like a hex nut. Let’s Go Pikachu and Let’s Go Eevee go on sale worldwide today, the first titles in the popular series for Nintendo’s newest console. Armed with richer graphics, the games are designed to appeal to the 850 million fans who have played Pokémon Go. Only those who purchase the new Let’s Go games can sync their smartphones and Switch consoles over a Bluetooth connection. This allows users to transfer pocket monsters between the mobile app and Switch games, and also unlock Meltan, the new character.

Nintendo is aiming to boost Switch sales in an otherwise lackluster year for software releases. Analysts point to 2016 when the debut of Pokemon Go rekindled interest in buying 3DS consoles to play more games in the series. They estimate that Meltan can help sell 7.5 million units of the new titles by March, according to four analyst projections compiled by Bloomberg. Meltan was trending among Pokemon social media users within hours of the game’s release.

By comparison, the Pokémon series has sold 101 million titles on Nintendo devices since 2004, second only to the Super Mario franchise with 121 million, according to Nintendo data.

“Pokemon Go had a significant positive impact on 3DS hardware and Pokemon software sales, so I think the potential is there for a similar impact on Switch,” said Piers Harding-Rolls, Head of Games Research. at IHS Markit. make a great gift product during the holiday sales season and that’s one of the main reasons it hasn’t lowered its full-year Switch shipping forecast. »

Nintendo needs to win the support of more gamers like Christina Grybel, a longtime Pokémon player in the United States who plans to buy a Switch to pick up the new pocket monster. “The main reason to get the Let’s Go game is for Meltan,” she said in an interview.

At the same time, the decision to tie new Switch game titles to Pokemon Go has alienated some members of the Pokemon community, who say the introduction of Meltan is a cheap move aimed at fans who like to collect all the monsters from pocket available. This, they say, requires players to spend at least $360 to buy a Switch game and a Let’s Go game. As a result, some say Nintendo is making it very difficult for fans to reach the series’ motto, “Gotta Catch ‘Em All”.

“Some people will never be able to complete their collections in Pokémon Go, which is sad and contrary to what Pokémon stands for,” said Lisa Zahn, a longtime Pokémon player in Germany. Other veteran gamers are also threatening to boycott purchases because they say core features like battles have been simplified too much to appeal to smartphone gamers. lowest scores in the series.

* Thank you for subscribing to our newsletter.